Top 6 things to do in Baku, Azerbaijan

By Fiona VazSeptember 21, 2022No Comments

Home » Top 6 things to do in Baku, Azerbaijan Baku as a tourist destination has caught the attention of many travel influencers and enthusiasts in recent times. The swanky yet ancient city is the capital of Azerbaijan.

Located on the shore of the Caspian sea and to the south of the Absheron peninsula, the oldest and largest city of Azerbaijan is known for its unique tourist attractions. From modern marvels and ancient wonders, mud volcanoes, the UNESCO world heritage site – Old City, and the world-famous Flame Towers, there is a plethora of charisma in Baku.

The city is a melting pot of culture and dates back to its ancient fire religion and Islamic traditions. Hiding behind an iron curtain for almost seventy years, the modern-day Baku has much to offer other than just skyscrapers. Needless to say, the gateway to Azerbaijan must be on the top of your ‘must-visit’ list.

Here are the top 6 things to do in Baku: 1. Tour the Old City by feet

Surrounded by fortified walls, ‘Icharishahar’ or ‘Old City’ is located in the heart of Baku; Also declared UNESCO’s world heritage site. The iconic Maiden towers, a 12th-century monument, are situated in the old city. Climb up the towers before sunset for a panoramic view of Baku and the Old City. It also houses a museum that narrates the evolution of Baku city. Furthermore, one can gaze upon the ancient city walls, visit the mosques, walk through the cobblestone streets, sit by the palace complex, etc. 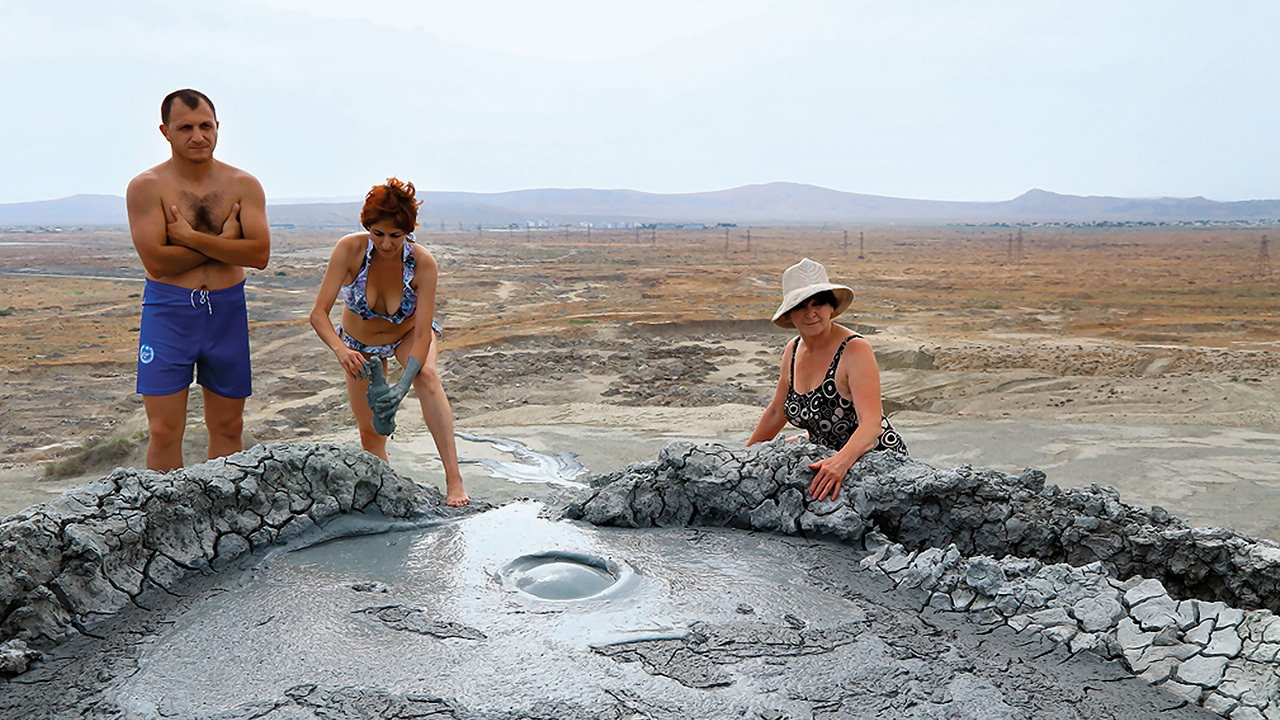 2. Visit the mud volcanoes and petroglyphs in Gobustan National Park

The post-apocalyptic landscape of Gobustan National Park is a unique sight to the eye. Take an hour’s drive from Baku and witness the oozing mud and a UNESCO-listed petroglyph; situated within the national park. More than half of the world’s mud volcanoes, around 300 are found here. What’s fascinating is that these mud volcanoes are thick, gooey, and cold yet unpredictable to mild erupting bubbles.

The Gobustan rock art petroglyphs date back 40,000 years to the Upper Paleolithic, Mesolithic and Neolithic periods. They are symbolic, cultural, and figurative drawings carved by early humans. The hostile landscape of Gobustan gives one a sense of standing at the edge of the earth. 3. Glance through the Flame Towers

Inspired by the age-old Azerbaijani tradition of worshiping fire, the trio tower is designed in a shape of a flame. Also, covered in LED screens from bottom to atop, it showcases movements of fire, thus entrusting the blend of ancient & modern-day Baku. If Burj Khalifa is Dubai’s iconic edifice, then the Flame Towers are Baku’s. The 620 ft, 33-floor skyscraper dominates the new skyline of Baku, visible from any part of the city. The towers consist of luxurious hotel rooms, residential apartments, and commercial spaces within. 4. A walk into the Azerbaijan carpet museum

Carpet weaving is a widespread folk art in Azerbaijan. Due to the historic culture and daily occupation of the Azerbaijanis, it now is a national symbol. The carpets are known for their bright colours, and distinctive tints used for aesthetics over walls, floors, mosques, and government buildings. The Azerbaijan Carpet Museum was built in the year 1967. While it displays a wide range of carpets and its artwork, it also possesses more than 10,000 other objects. Few of them include ceramics, and jewellery; all of which date back to the bronze age. One pays a minimal fee to enter the museum. 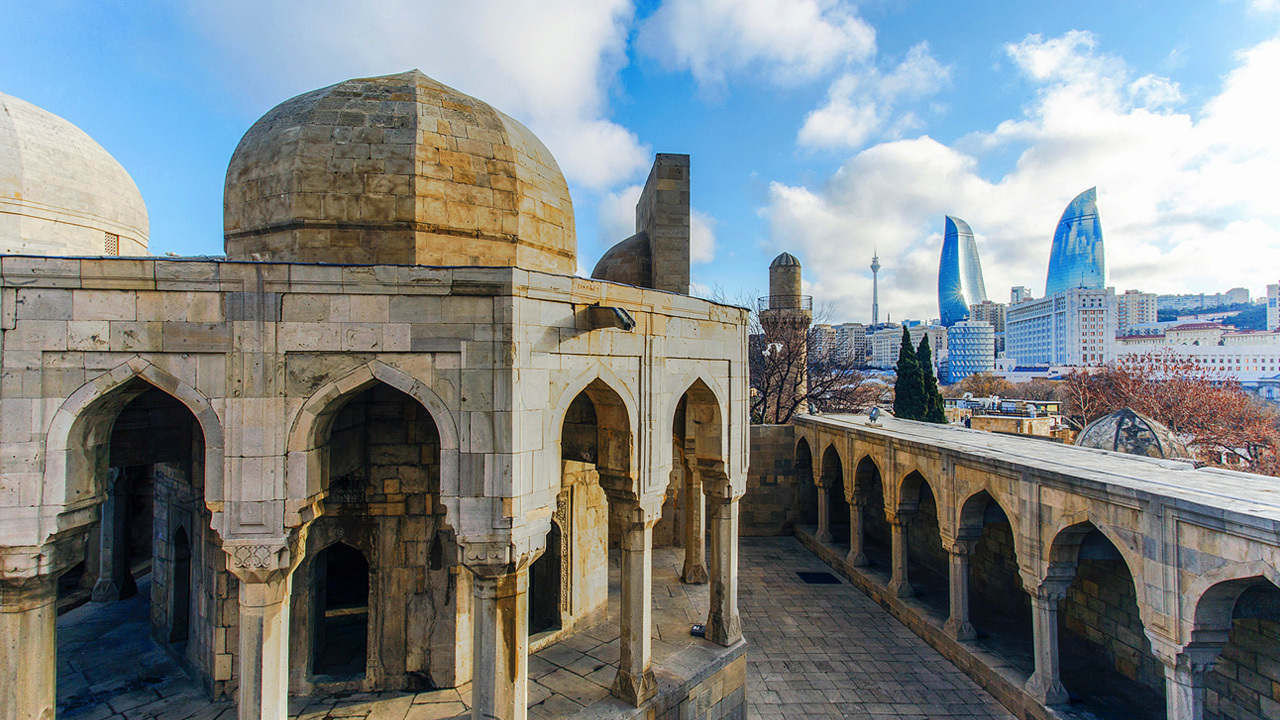 5. Wander through The Palace Of The Shirvanshahs

Built in the 15th century by the Shirvanshah kingdom, the rulers of Shirvan, the palace holds an important place in Azerbaijan’s history. Back in time, Shirvan was the name of the land, that we today call Azerbaijan. The palace is a listing in the UNESCO world heritage site along with the Maiden Towers and the Old City. The royal residence restored in 2003, consists of a building with the mausoleum of King Khalilullah buried with his mother and sons. Alongside two mosques, the Murad’s Gate, a “hammam” (also called a bathhouse), and the philosopher and scientist Sayid Yahya Bakuvi’s mausoleum.

6. Step into the Ateshgah – Fire Temple of Baku

The word ‘Atesh’ means fire, while ‘Gah’ means bed. As history reads, below the land where the temple is erected had an occurrence of a natural phenomenon. That is, the natural gas moving up to the surface to make contact with oxygen. This provides fuel for flames that could burn perpetually. This phenomenon was called ‘eternal flames’ which were said to have mystical theories by the fire worshippers – the Zoroastrians.

Hence, today, the temple structure consists of the altar that sits right above the natural gas vent with four flames on the rooftop. Around the walls of the temple, there are inscriptions in Arabic and Indian (Sanskrit, Devnagri & Punjabi scripts). 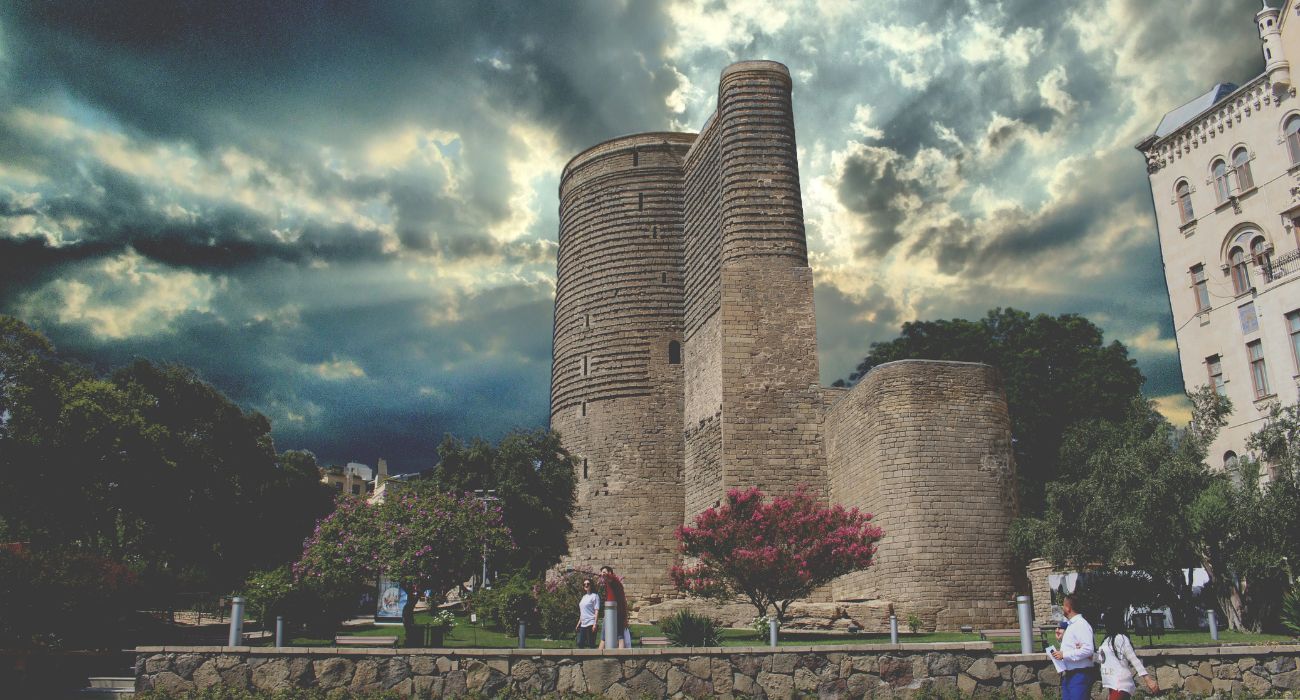 Aertrip with us to Baku

The capital of the ‘Land of Fire’ has in-store a contrast of ancient and modern sightseeing. Every nook and corner of Baku has something in store to admire. While the city center boasts modern-day architecture, the adjoining huts and ancient walls enchant with its historic beauty loud and clear. When in Baku, one is sure to expect the best of local hospitality, high-quality restaurants, a Mediterranean climate, and a low crime rate, making it safe for tourists.

With that being said, our holiday experts have curated exhilarating and affordable itineraries for your next trip to Baku starting at just 25,174/- per person. You must Book Now and travel back with unforgettable memories from the Gateway to Azerbaijan – Baku.